May is a shy, anxious, chubby nerd. Cleo is a tall, confident, athletic dancer. The two seem to be nothing alike at first glance, and many people are shocked to find out they're close friends- not to mention a couple.

Life is peaceful for the young lovers, except for the fact that a strange, unfriendly rivalry is beginning to develop between Cleo and a girl from her dance studio.  As time goes on, it's clear Cleo's rival is going beyond the limits of good sportsmanship, and May knows this- but what can a girl like her do? Not much... unless she were to become a magical girl, of course!

... only, hey, isn't there something a little off about her transformation sequence?

PRETTY MAIDRAGON MAY  is my second light novel, featuring a light fantasy love story between two women! This is a F/F story that features transformation and magical girls written for the Itch.io Lite Novel Jam 2k18!

This light novel is rated PG-13 for coarse language and violence. Other content warnings include descriptions of bullying and harassment, including moments of racism, homophobia (specifically lesbophobia) and fatphobia, as well as some scenes involving threats of more intense violence.

This light novel is a little over 10000 words long (or 38 pages), and can be downloaded for free! If you want to, however, you can choose to donate a bit of money when you download, which I would REALLY appreciate! 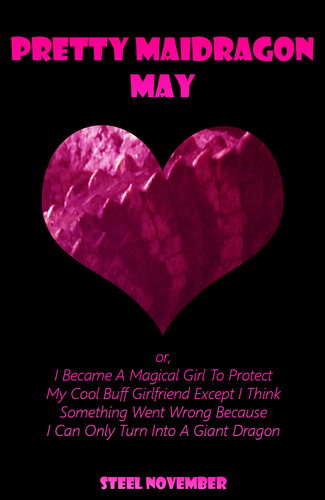